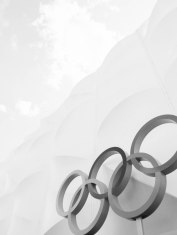 The Olympics is one of the biggest sporting events in the world that connects to a wide array of global and local political, economic, social, cultural, and technological processes. As such it has received a lot of attention, both in the popular media and through academic analysis. In order to cut through this multiplicity of voices and opinions we turned to Dr. Bryan Clift to explore how he views to games in Rio and what it means for the future of the Olympics.

Without trying to encapsulate all of the quality commentary and analysis that exists on the games in this small blog space, we will simply signpost some work that we think is important to tell the story Rio 2016 and give context to this episode. Being able to take the impact of this event seriously, informed by critical conceptual frameworks, is the only way we can all take the first step in ensuring it is a positive force. The Olympics shines the brightest spotlight on the role sport, and idea of the body in motion, can play in our society. In so many ways it encapsulates the very best and the very worst. Indeed this balance is a challenge to our understanding, but when grasped with greater nuance it can also be seen as an uncertainty that creates a great context for change. Both this post and episode 1, provide a discussion of what should concern us, but also the hope that the Olympic movement can still engender in the face of great cynicism.

The first resource we can point your attention towards is the chapter published by Dr. Clift with Dr. David Andrews, titled ‘Living Lula’s Passion?: The Politics of Rio 2016′, that can be found in The Palgrave Handbook of Olympic Studies. The abstract for the chapter highlights that it is primarily a discussion of how the Olympics serviced the interests of then President of Brazil, Luiz Inácio Lula da Silva, often referred to simply as Lula. Seemingly the place the games held in the collective imaginary of the Brazilian people, in combination with the FIFA World Cup in 2014, spurred popularist support in the country for Lula that propped up his political successes. However, with the failings of the games organization, and more recent allegations of widespread corruption, the Olympics may well have flipped to become the basis for Lula’s political downfall, a context that is also quickly spreading to effect his political allies. This chapter is a great in depth look at the context for this rise and fall, the effects of which are ongoing.

The second thing we want to connect you all with is a two part documentary series by Vox looking at the impact of the games in Rio, specifically highlighting the ways in which the government in conjunction with the IOC is diverting attention away from ‘the other side of Rio’. The development of the games, its venues and transportation infrastructure, has cut across the city and has been leveraged as a tool for forcefully re-developing low-income neighborhoods. Basically what the videos demonstrate is an active plan of destruction or diversion that is heavily impacting many of the cities favela communities.

Lastly in the theme of balance, recognizing the immense potential alongside the causes for concern that emanate from the current format of the games, we wanted to point you towards an article from Jonathan Watts at The Guardian newspaper. He highlights a number of voices from the people of Rio that paint a balance of contradicting experiences of the games, reflecting much of our own ongoing unresolved views on the Olympics.

Lastly we want to thank Dr. Bryan Clift’s help with the episode, again his insights were extremely valuable. His faculty profile page that I mentioned at the end of the episode can be found here