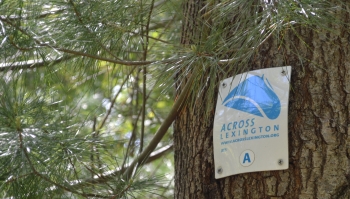 (Photo Credit: Photo of ACROSS Lexington way-finding sign on route A.  Photo taken by Oliver Rick.)

In this episode we explore the history and spaces of suburbia, focusing on the role of physical activity in the shaping of suburban life.  The story and development of American suburbs is a long, complicated, and often overlooked social history, but what many people forget is their persistent role as spaces where people exercise, play sport, and seek leisure. In developing the episode we spoke with several contributors to examine questions not only of what the suburbs have been in the past, but what they could be in the future as places where people are physically active. It is becoming clearer with each day that cities continue to spill out into their surrounding districts, and there are intense commercial pressures to privatize and enclose the public/open lands of the these communities. Here we examine how these pressures have been dealt with in suburban communities and what these communities can do to preserve land in accessible and equitable ways.

The Complex Story of the Suburbs

When the suburbs are often depicted in mainstream accounts, especially in the U.S. context, they are often inline with a well-worn trope of the communities that developed on the outskirts of major conurbations in the post-World War II period.

Yet, the suburbs have been an integral part of the American urbanization processes. With every large city came the transitional spaces that connected with its rural surrounds. Certainly these were not always so formalized, but their role has always been significant. Indeed, an early informality to these spaces created the historical conditions that led not only to later formalization in the post-war era, but also preserved a lesser discussed diversity of the suburbs. The development of massive federal projects and programs such as The Home Owners Loan Corporation, The Federal Housing Administration, and The Federal National Mortgage Association accelerated expansion of suburban communities and fostered white flight migration patterns. However, in this episode, Dr. Andrew Wiese, Professor of History at San Diego State University, highlights how a range of racial communities flourished outside of the city, even when deep-seated segregation policies kept them relatively separate.

From this point the suburbs found further physical standardization and greater social integration, lasting from the 1970s to the present as industry re-located outside of urban districts and brought a new demand for a range of wage earners. In addition, significant attempts to further dismantle overt and covert housing based segregation has drawn out a range of class and racial groups to these ex-urban spaces.

Across each of these phases the ability of suburbs to blend relative density with open space have made them prime contexts for physical activity practices and communities. Many suburban community institutions have not only established and preserved key leisure sites for their residents, they even function as destinations for urban residents to be more physically active. Within each phase of suburban development these physical activity and leisure practices has varied in line with the different historical moments. Indeed, what is particularly interesting for us today is that many of the green spaces that remain in suburban communities are expressions of that layered history.  Parks, pathways, conservation lands, and cut-throughs regularly mark the varied spatial evolution of suburbia.

These sites often now face intense pressures as their value continues to increase with the growing sociocultural and commercial desirability of suburban communities. Attempts to monetize public lands through their development into housing or commercial land use are ever-present. Additionally, the move to privatize these spaces, even when preserved as green space, has threatened their public accessibility. However, some communities continue to fight to save these spaces as a common good for all.  This struggle goes on…

For this episode, we looked at the recent activities in the community of Lexington MA. Most people know how the significant role the community played in American history (the Battle of Lexington and Concord during the American Revolution), but it is really what the local residents are trying to do for their future that drew us to their story. 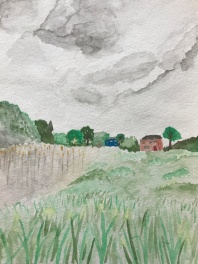 Building on a legacy of preserving conservation lands, historical sites, and physical activity facilities, the residents of Lexington have helped form and maintain groups dedicated to protecting these sites. The Bicycle Advisory Committee, the Greenways Corridor Committee, those working with the ACROSS Lexington project, the Conservation Stewards, and many others have all played a role in making sure publicly accessible resources are available for future residents of the community, and for those coming into Lexington from its surrounding towns and cities. This is not to say that Lexington’s course of action can be replicated within every community, but it can nonetheless serve as a model  in the importance of taking steps to preserve physical activity and leisure sites as a common good for all to access and enjoy. Recognizing already existing resources, developing buy-in from across all members of the community, and designing resources that can become part of the everyday process of other parts of the community, are all identifiable steps that have contributed to Lexington’s success. Indeed it is these valuable insights and others that can contribute to a blueprint to be used by a range of communities interested in developing similar systems of physical activity space for themselves.

Dr. Andrew Wiese’s book – Places of Their Own: African American Suburbanization in the Twentieth Century, from The University of Chicago Press.

While this episode covers how communities have looked to preserve physical activity spaces, you can also check out our Episode 3 to listen to the history of purposefully designing physical activity and leisure space into communities. These episodes pair nicely together!