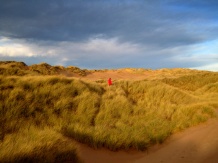 Foveran Links dune system in Scotland, a designated Site of Special Scientific Interest.  The nearby dunes at Menie Links became the site of the Trump Organization’s planning application to build a golf course, hotel and houses.  Photo attribution: Martyn Gorman.

In the year 2012, Donald Trump was still a real estate magnate based in New York.  The real estate portfolio for the Trump Organization, at the time, consisted of commercial, residential, hotel and entertainment resort properties.  The Trump Organization also built and owned “luxury” golf course properties across the United States and around the world, including courses in Dubai and Indonesia.  In July of 2012, the Trump Organization opened a course, Trump International Golf Links, just north of Aberdeen on the northeast coast of Scotland.  To this day, Trump continues to declare it “perhaps the greatest golf course anywhere in the world.”

The development of Trump International Golf Links, Scotland, however, was contested and politicized from the beginning.  There was concern by local residents over the Trump Organization asking the Aberdeenshire Council to use compulsory purchase powers to evict residents from their properties.  Environmental groups and Scottish citizens alike protested Trump’s decision to build the course in part on a protected and environmentally sensitive Site of Special Scientific Interest.  As a result, local residents and activists organized grassroots efforts to protest and resist the development.  The development was so contested and covered by international media outlets that a documentary was made, You’ve Been Trumped, which detailed the stories and perspectives of those local residents adversely impacted.  With a President Donald Trump now residing in The White House, the story of Trump International Golf Links, Scotland allows us to better understand our current political (and sporting) moment.  Indeed, the allegations of Trump’s bullying tactics during the course’s development provide important historical context to recent discussions of Trump’s bullying behavior as President of the United States.

In 2017, scholars Brad Millington and Brian Wilson published an article in the International Review for the Sociology of Sport (IRSS), in which they explored the environmental and social politics surrounding the case of Trump and his golf course development in Scotland.  A few years previous, they conducted interviews with some of the local residents who were involved in resisting the development.  This was part of their broader research agenda on golf as a global sporting industry, which culminated in the 2016 book The Greening of Golf: Sport, Globalization and the Environment.  In their 2017 IRSS piece, they explored the case of Trump’s Aberdeenshire golf course, but they also considered the perspective of the environmental site in this story, leading them to reflect on the issues of “Anthropocentrism”—a “human-centered” world perspective—within scholarship on sport and environments.  Seen through the lens of Millington and Wilson’s article, the story of Trump International Golf Links, Scotland is also a story about “whose” interests (human and non-human) are privileged in such contested sporting contexts.

In this episode of Somatic, we talked with Drs. Millington and Wilson about their research on golf and the environment and asked them to reflect on the case of Trump International Golf Links, Scotland and the question of Anthropocentrism in the study of sport and politics.  Our hope is that the episode appeals to the sport scholar and lay podcast listener alike, as we explore a fascinating context of political, social, and environmental contestation, while considering how scholars can better understand the role of the non-human in such contexts.  The episode centers on our interview with Drs. Millington and Wilson, with each section interwoven with original music.

Listeners can find hyperlinks to Millington and Wilson’s article and book in the paragraphs above, as well as hyperlinks to various news articles reporting on the development of Trump International Golf Links, Scotland.  Millington and Wilson also recently wrote a short piece on the politics of environmentalism and sustainability surrounding Trump’s golf course for Engaging Sports, a website affiliated with the North American Society for the Sociology of Sport scholarly community.

Dr. Brad Millington is Senior Lecturer in the Department for Health at the University of Bath (UK).  His research examines sport, health, and physical activity, with a particular focus on sport media and technology and sport’s relationship with the environment.  He is also the author of Fitness, Technology and Society: Amusing Ourselves to Life.  Dr. Brian Wilson is Professor of Kinesiology and Director of the Centre for Sport and Sustainability at the University of British Columbia.  His research concerns “consumer culture, media, youth, the environment, social inequality, peace, social movements, qualitative methods, and sport and leisure studies generally.”  He is the author of Sport & Peace: A Sociological Perspective.  Together, they co-wrote the 2016 book The Greening of Golf: Sport, Globalization and the Environment.

Sound Acknowledgements: Multiples sound clips on this episode were taken from Freesound.org.  The sound clips can be found here and here.  The episode also included audio clips taken from contemporaneous news reports on the development of Trump International Golf Links, Scotland.  Those news clips can be found here, here, and here.  All music on the episode was written and recorded by Somatic co-founder Sam Clevenger.